It’s exactly nine years since Teletext Ltd hosted its last full news edition of analogue teletext. On 14 December 2009, the ‘world’s largest TV text service’ said its final farewells with a selection of stories and art looking back at their seventeen years on the air.

Naturally, this was the perfect excuse to showcase Paul ‘Biffo’ Rose’s pixellated icons that adorned the head of each magazine, from Cedric the sea monster (Ace) to TV critic Sam Brady and even the running clock.

Though Bamber Boozler wasn’t included on the icons pages, he did have his own goodbye messages on 390. His characteristic grin is in stark contrast to the sadness of such a situation – the second image is Bamber’s very last appearance on Teletext.

Rose’s Turner the Worm also featured, appearing alongside Glug the Slug to bid farewell just before a large magenta dinosaur emerged to devour him and the rest of Teletext. Oh no!

Over on the letters page, teary-eyed contributors lamented the decision to remove services that had become a staple of their morning routine. Breakfast time would never quite be the same.

Lightening the mood somewhat, here is the image chosen to represent ‘Frame-it’, which broadcast hundreds of kids’ teletext-ised drawings during its lifetime. And quite fitting it is too… mainly due to its effective use of held graphics. 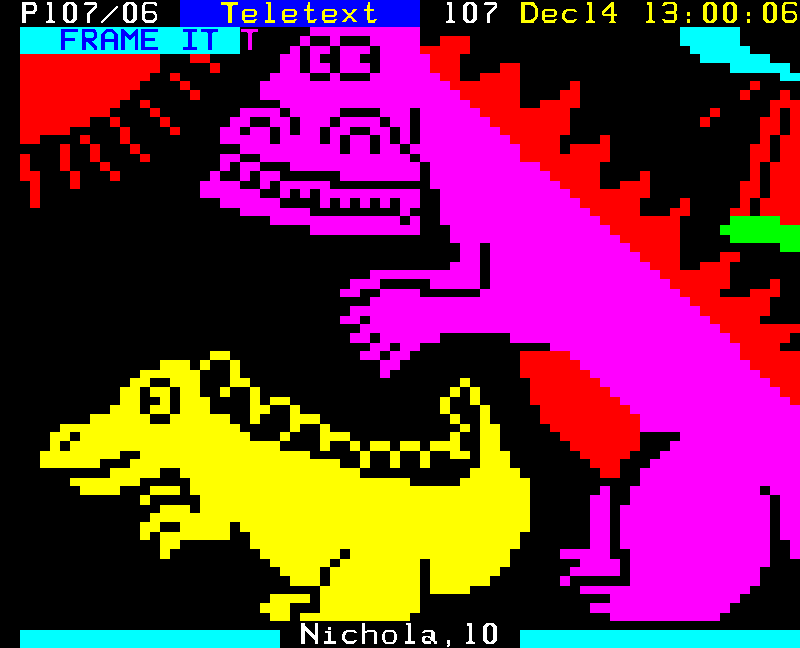 Editor John Sage compiled a 500-word article –positively chunky by teletext standards– revealing that, among other things, people didn’t much like when page numbers were changed. And even at the very end, many years into the Internet Age, Teletext received 50,000 opinions a month and 11 million views a week.

But with that, Teletext’s news service was gone. The company shifted attention to their lucrative holiday service, which continued online. As of 2018, it remains in business under the same name despite the closure of all UK commercial teletext services.

Thank you to Ant (Superwonderstar) for the captures in this post. 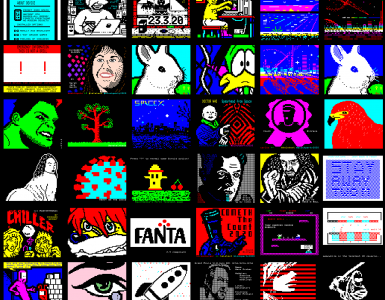 RESULTS ARE IN for the Teletext Blockdown Party art contest

The winners have been announced! In a lavish live results show on Friday night, the results of the illustrious Blockdown Party Art Contest Prize were delivered in three orange envelopes. View the video here to see what happened (results at 1:03:55)...

Digital artist Jarkko Räsänen is a member of the FixC artists co-operative, who have been organising teletext festivals since 2012. Their most recent teletext project, TART2020 (Teletext Art 2020), proved so popular that it has been extended for... 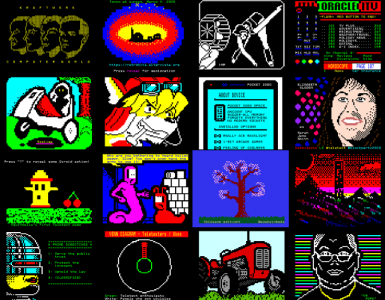