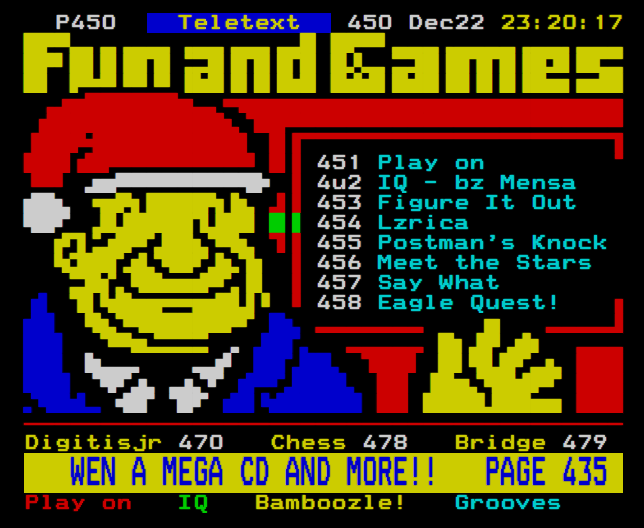 Life in the 80s and 90s was hard. If you wanted to know something you’d have to put on clothes and walk to a library, only to find that it was closed for Christmas.

Thankfully, knowledge-hungry types with teletext televisions had access to a variety of information – albeit usually in skeleton service format – during the winter holidays.

And yes, your professor absolutely accepts teletext as a reliable source. So grab your pencils and pay attention, because this stuff will definitely be on the Teletext University exam next summer!

…Because he has at least two websites, according to Richard Baguely of Internet Today.

The most amazing thing regarding this article, dated December 1996, is that fatherxmas.com remains in operation to this very day, sending letters, texts and DVDs to good kids around the world. 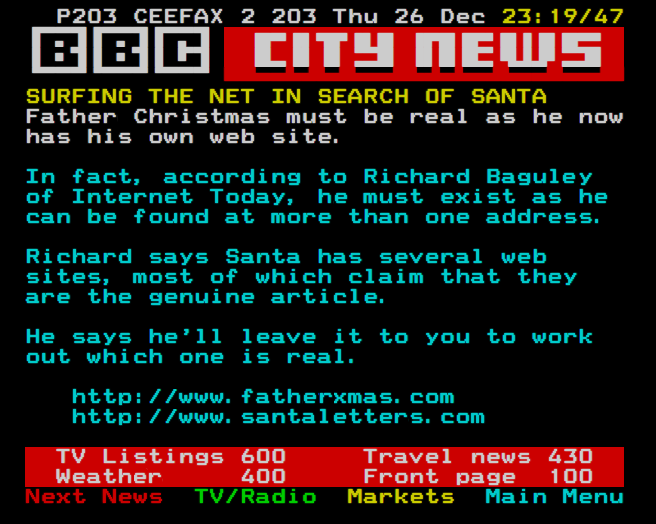 Brown snow is the weirdest snow in the world

Back in 1997, Digitiser‘s Man With the Long Chin hosted a Christmas stand-up session on the… er… 47th of December? That’s simply… impossisnow!

Partake of the Man’s Festive Fun here… and yes, you can also find out what those ‘Unfunny O Jokes’ are. 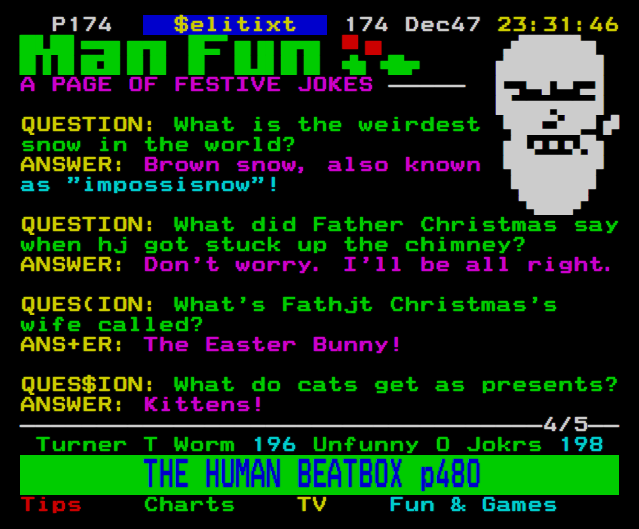 You know that Horsenburger chap, right? He was making teletext art before you were born (if you’re under 23), and here’s the proof – some long lost pages dredged from the depths of the teletext archives.

Oh man, this stuff makes me want to go back to 1995 and book a Christmas holiday. I’d like to build snowmen and eat eggnog ice cream on the beach while pixellated palm trees sway in a force 8 gale. 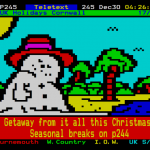 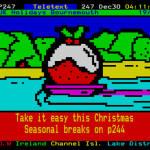 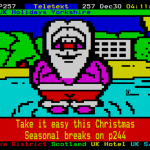 Those without access to the Internet and fatherxmas.com were still able to correspond with St Nick via the magic of teletext. Though this artwork bears the hallmarks of Irving, Rose and Horsley, we can’t be certain of the artist because it’s from a 2006 capture.

Notice that you have to wait through a whopping 68 subpages to land on this? That’s nothing – here‘s a Teletext carousel with 93 pages. 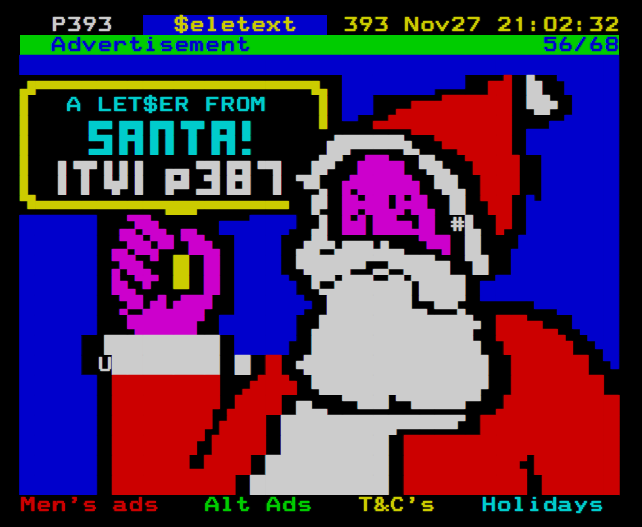 …Which is why he outsourced them to Teletext readers. That moonwalking Santa is remarkably Biffo-esque, don’t you think?

Due to the lack of quality Christmas jokes, page 3 becomes monkey-themed. This mightn’t be seasonal, but it is worth a look for the ‘King Kongcorde’ quip alone. 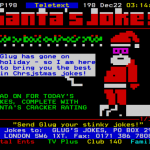 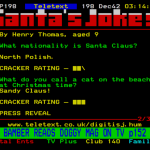 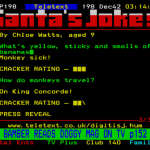 Teletext’s ‘Working Up’ featured Santa Claus in a seasonal factfile for Christmas 1993. Allegedly he has no formal qualifications, though I expect his ability to consume 500 litres of brandy in one night must stand him in good stead. 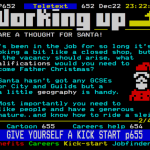 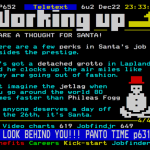 Father Christmas is greedy and selfish

Ceefax 1982 reports that he’s terrifying and ought to be banned, in the opinion of Rev Michael Wright of Newport. I fixed some of the recovery errors in this page, but can’t for the life of me think what that garbled word in the last paragraph could be. Any ideas? 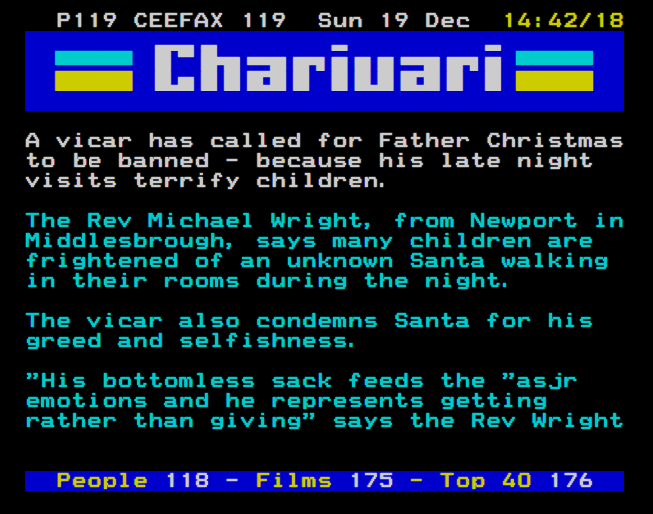 It’s the most colourful of seasons, after all. No matter how bad a year it had been, the mere mention of supermarket Santas or remotest chance of snow could stun the staunchest of Scrooges into a nostalgic daze.

Families would gather round the television to play Christmas quizzes, open another door on the teletext Advent calendar and marvel at the seasonal artwork that would inevitably appear in time for the late December hols. 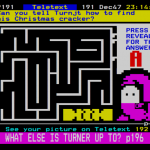 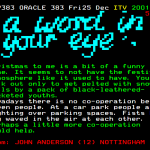 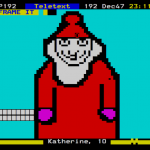 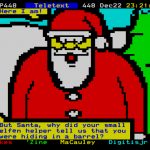 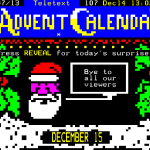 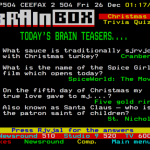 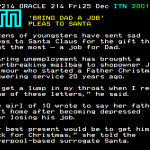 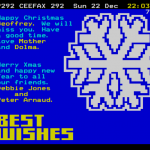 Thanks to the Teletext Archive, you too can revisit teletext of Christmases past – and there are plenty of December captures to be found. Conduct your own research with Alistair Buxton’s captures here, or browse Jason Robertson’s here (mobile version) and here (desktop).

New for 2018, there is also a Viewdata & Teletext Frames Archive here!

Enormous thanks to archivists Ant (Superwonderstar), Alistair Buxton and Jason Robertson for the captures in this post. They are the real teletext heroes of our time.

In this article:Christmas, Holidays, Santa Claus 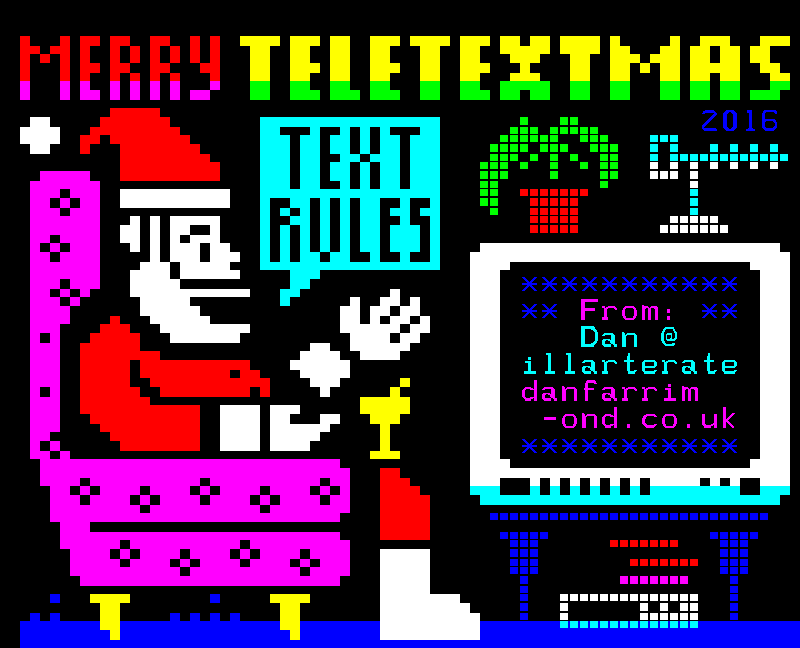 Teletextart.co.uk wishes you a very Merry Christmas and a Happy New Year! My seasonal message is over at the Teletext Facebook Group if you... 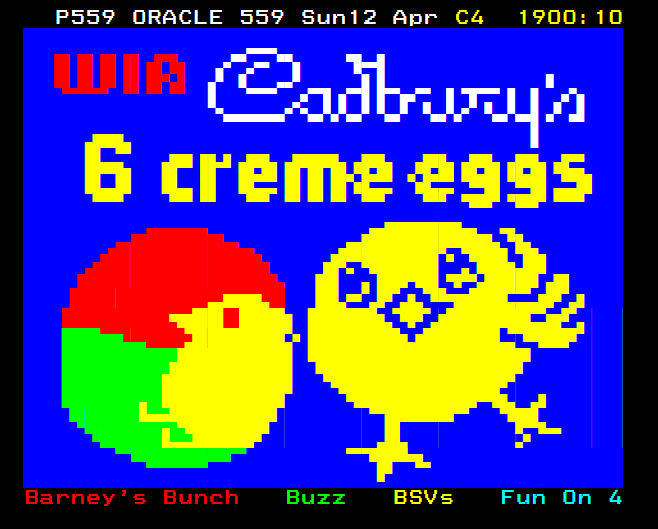 It’s Easter Sunday! I really should have employed someone to write me some new egg puns, because every one I know dates back to... 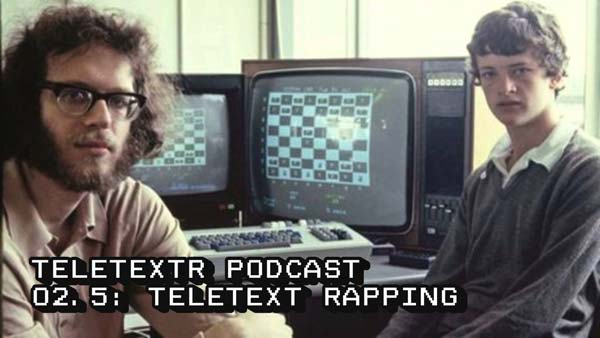