A glossary of selected teletext terms. A more comprehensive list can be found in the Dictionary of Computing (5th Edition, 2004), viewable here.

ALPHA (FOREGROUND) BLACK
Originally, teletext did not support black text or foreground graphics. The Level 1.5 ‘update’ allowed for use of foreground black, which is now widely (though not entirely) supported.

According to the Advanced Teletext Specification, “Alpha Black should be used with caution as it is interpreted by some existing Level 1 and Level 1.5 decoders”.

BLAST-THROUGH ALPHANUMERICS
“Characters that can be displayed on a videotext terminal when it is in graphics mode.” — Dictionary of Computing, 5th Edition, Bloomsbury, 2004

Capital letters and limited symbols that can be added in teletext’s graphics mode. This can save having to switch between graphics and text mode in order to display text. 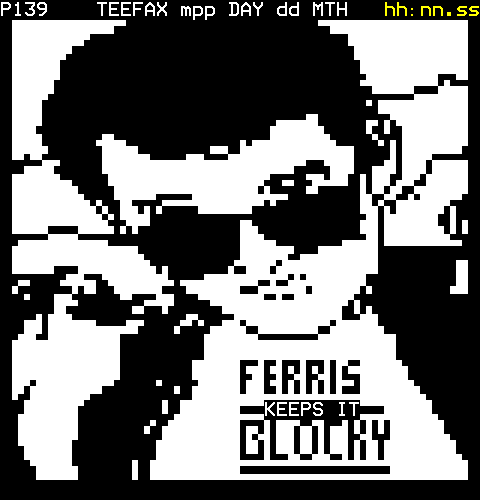 CONTROL CODE/CHARACTER
Also known as a ‘spacing attribute’. A marker occupying one cell on the teletext ‘grid’, changing that row’s attributes from that point. For example, one control code may be placed to change from yellow graphics to cyan text.

Some control code functions, such as Flash/Steady can be deactivated with another code later in the row. Ordinarily, control codes output a blank (black) space where placed, unless held graphics are used.

DOUBLE HEIGHT (MODE)
1. Mode supported by some televisions that will increase the height of teletext rows on your television. Pressing the DOUBLE HEIGHT button on your remote will ‘zoom in’ on the top half of the teletext screen, while pressing it again will do the same for the bottom half.

2. A control code that will set text or graphics to span two rows instead of one.

FASTEXT
1. A new feature introduced prior to 1987 that added colour-coded ‘links’ to the bottom of a page, operated by red, cyan, yellow and green buttons on the remote. This facilitated, amongst other things, the popular multiple choice quiz known as Bamboozle. 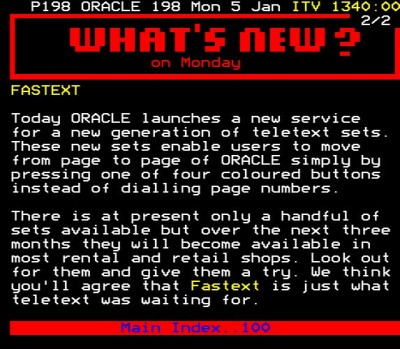 2. The name of a teletext service operated by Sky in the mid-90s.

FLASH
Also known as blink, a control code that sets graphics or text to flash, appearing and disappearing at a roughly 1-second interval (Level 2 implementations allow for longer blink intervals). Often used to highlight important parts of a page, for example a phone number in an advertisement.

HELD (GRAPHICS)
Not to be confused with your television’s HOLD function (see below). Ordinarily, control codes leave a blank space wherever placed. In ‘held’ mode, spaces occupied by control codes will replicate graphics from the previous character cell, filling that gap.

‘Held graphics’ are a slightly more advanced aspect of teletext design, but can yield impressive rewards.

INDEX
1. Main page of a teletext service, most commonly 100.

2. A button on some teletext remotes that loads up the index page.

MIX
Pressing this button on your remote displays foreground elements on top of the TV broadcast. This allows you to, for example, watch a cricket match with a live teletext scorecard superimposed over the top.

REVEAL
Certain parts of a teletext page can be hidden from view until the REVEAL button on your remote is pressed. They will disappear if you press it again. Used to great effect in quizzes (press REVEAL for the answer) and on Channel 4’s Digitiser in the UK. 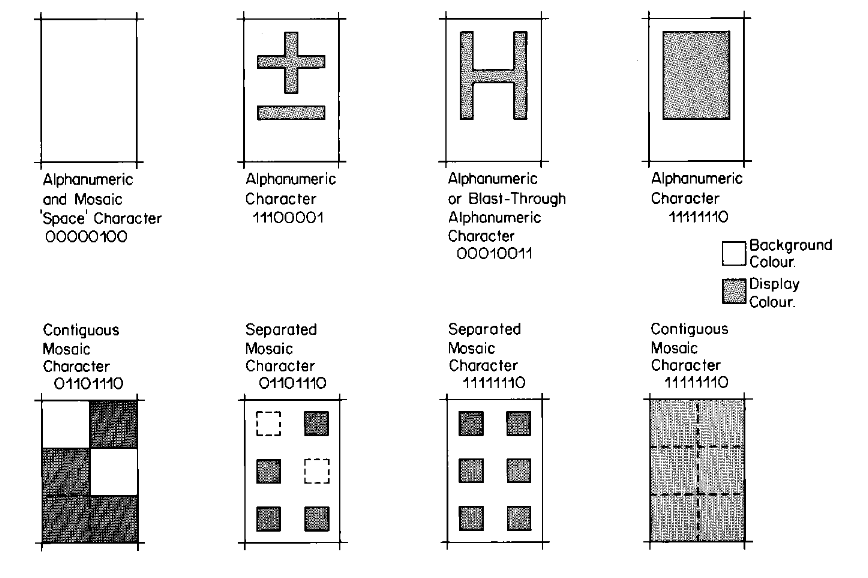 2. (Upper case T, ‘Teletext’) Teletext Ltd, a company that provided teletext services in the UK from 1993.