If the Internet invented clickbait, then ClubCall and its competitors were the masters of phonebait. With increasingly juicy teletext headlines, they lured many a football supporter into their premium rate hotlines relaying pre-recorded news, gossip and statistics.

The pre-Internet days were relatively hard times for information-hungry fans. Unless you were lucky enough to support a club with significant newspaper coverage, the best way to access vaguely reliable information about your team was the humble telephone.

And just like podcasts that save their most valuable content for the second half of the show, these hotlines would bury that tiny nugget of potentially golden information right at the back of a 10-minute call… but unlike podcasts, you couldn’t skip straight to that part and the whole thing cost 50p a minute.

ClubCall was first to capitalise on this concept, starting out as a “club-by-club telephone information service” on BT Supercall in the late 1980s. The service was later sold to Ladbrokes, who already had strong advertising links with ORACLE. 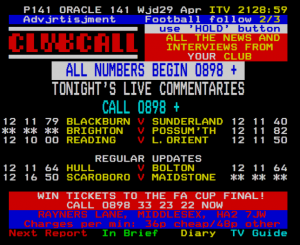 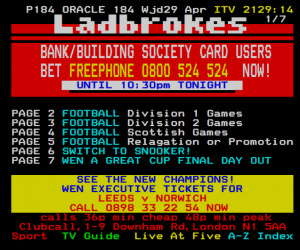 As of January 2019, the first ClubCall teletext pages in our archive are from 1992 (above). These slightly predate the launch of the FA Premier League, which would bring about greater commercial opportunities and general appetite for the sport.

We do, however, have pages from competitor TEAMTalk that date from 1991. In the following advert, we see that Rapid Soccerline held the TEAMTalk name at this time. This incarnation of the brand utilises background colours to identify individual teams, making it slightly more colourful and much busier than ClubCall‘s design offers. 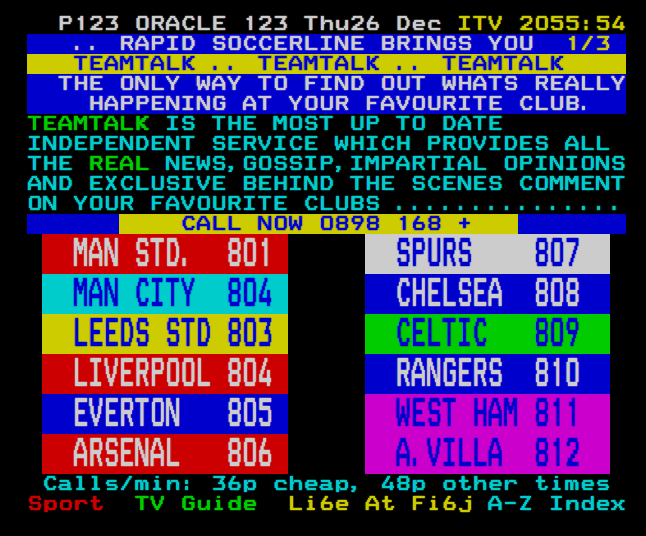 By the time ORACLE gave way to Teletext Ltd the following year, ClubCall were also heavily promoting other services such as horse racing and Russell Grant horoscope hotlines.

It’s always great to see digitised faces, but come on guys, there’s plenty of room to stuff more text in those gaps, even with the inclusion of a ‘see Cher’ competition! 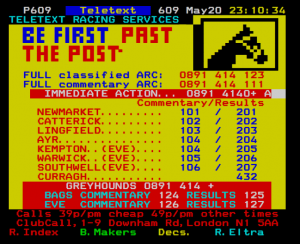 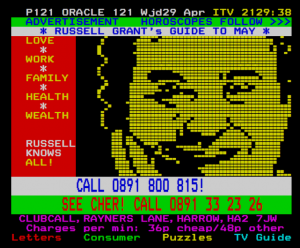 TEAMTalk also ran lines for other sports such as American football. Here is a page from the NFL ‘Action Line’ in December 1994. It’s worth noting that Channel 4 provided UK night time coverage of the NFL in the 80s and 90s. 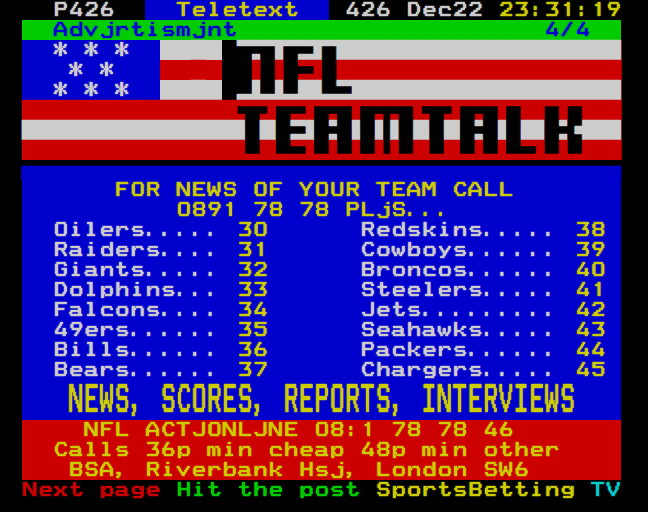 ClubCall‘s heyday was the mid-90s – at one point, the company was receiving 12 million calls a season. The following ads, dating from 1995, looked to maximise profit by cramming as many club hotlines into a single teletext page as humanly possible.

Note that the phone numbers in the second example are considerably more expensive, presumably due to them being for Premier League teams. 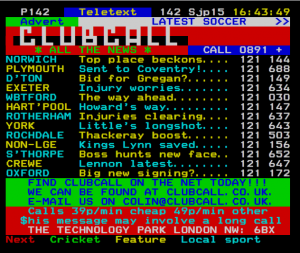 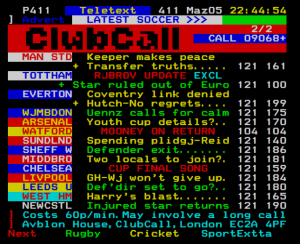 Also note references to the brand new ClubCall website, which offered a quiz, quotes and league tables. An archived version of the site from 1996 can be found at the Wayback Machine here. 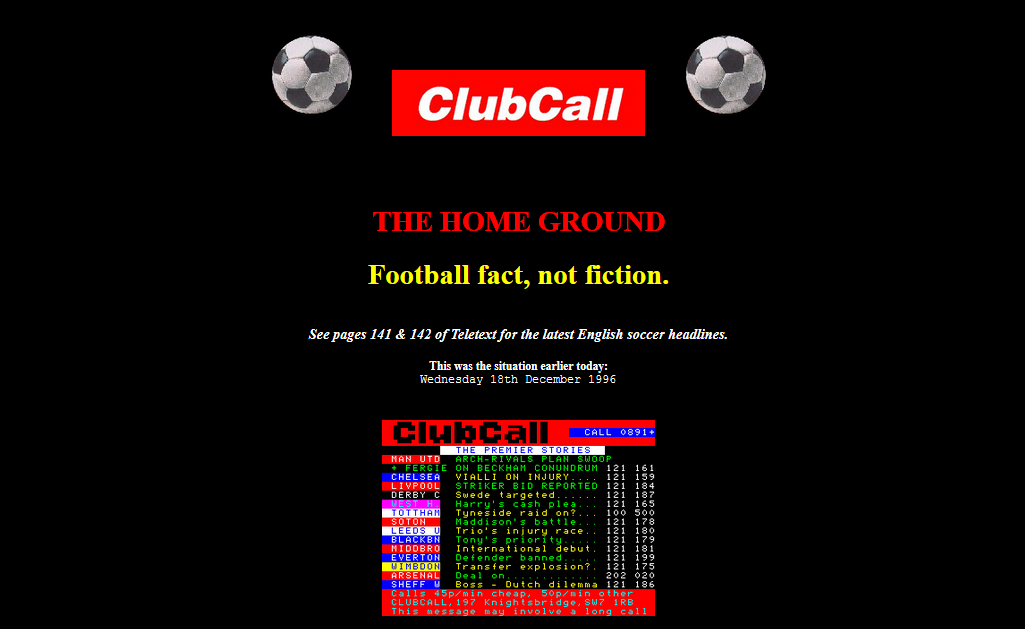 The bottom of that page has a ridiculously 90s message:

The ClubCall Web Site will be relaunched as a completely new, interactive, database-driven ‘tour de force’ in the New Year, so:

Indeed, the Internet was soon to kill off the vast majority of teletext hotline ads. But while ClubCall concentrated more on their web presence, Leeds-based TEAMTalk.com began to dominate teletext services. 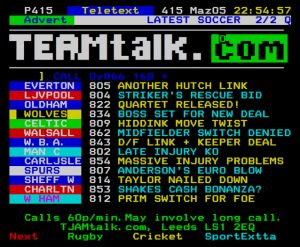 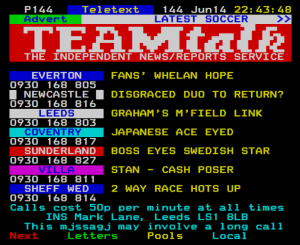 Design-wise, TEAMTalk experimented with a sleek green theme, which saw a definite departure from the bold, colour-clashing pages of just a few years ago.

With mobile telephones becoming ubiquitous, a new SMS service was launched – though we’re not sure if ‘35.25p’ in the below image is a recovery error or they did indeed charge an extra quarter of a penny per text message.

The 2000s saw a rapid decline in hotline advertisements, though they clung on for a good few years. By 2007, prices had risen by 150%, at least if the following promo for Fansfc.com’s information line is anything to go by.

If that ‘long call’ lasted over 10 minutes, you could expect to pay upwards of 15 quid to hear that ‘London star signing’ was just a kid from Barnet reserves who would become a bricklayer within six months.

Just a couple of years later, Teletext Ltd’s services would be closed down, and across the following decade every last UK teletext service faded away.

Finally, in January 2017, RacingUK announced the closure of their service, signalling the end of commercial teletext in the United Kingdom. 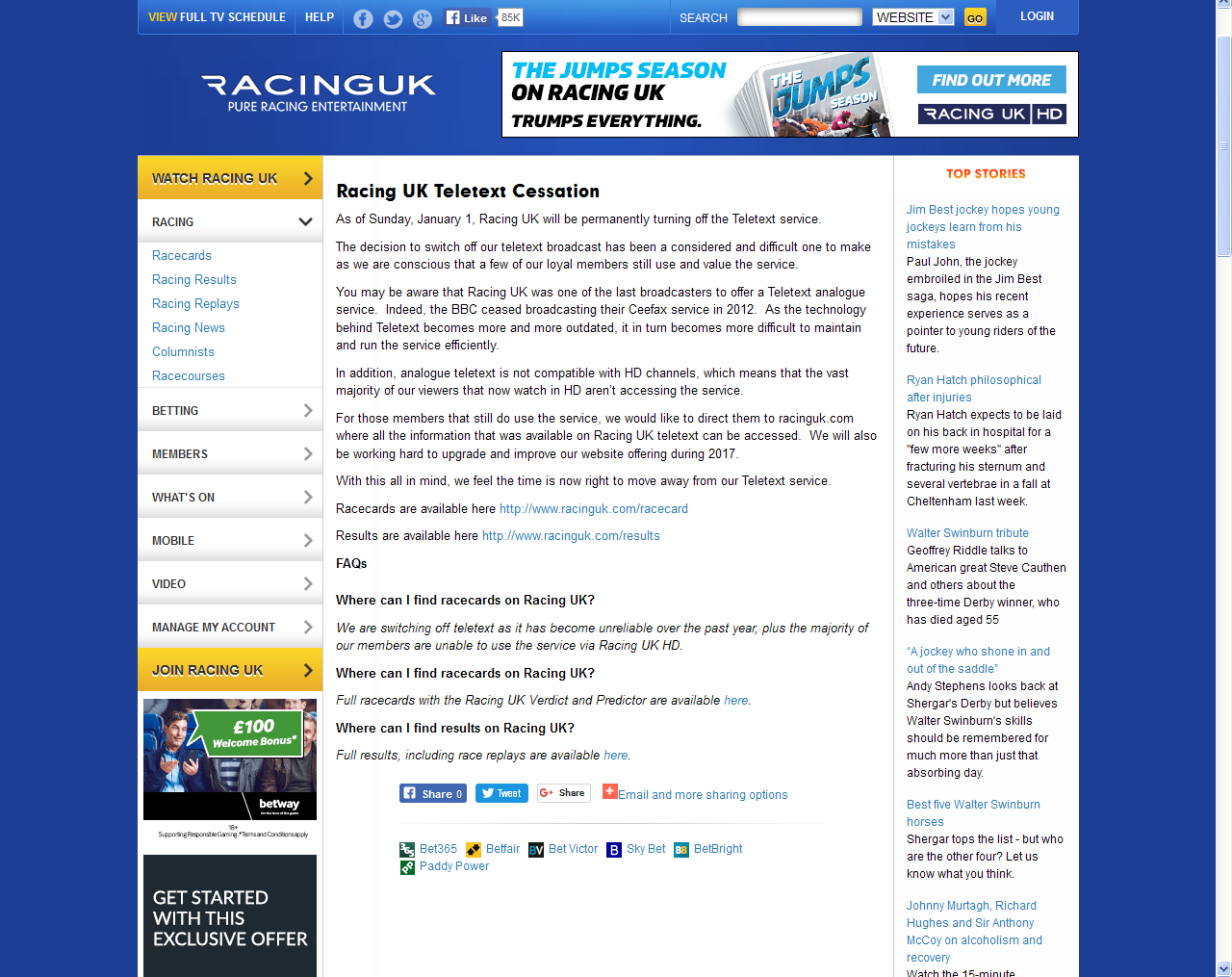 At time of writing, FansFC‘s domain has been bought by squatters. Their website disappeared some time after 2013 and operators Phonemedia Ltd dissolved in 2015.

By contrast, TEAMTalk.com is still going strong, and ranked one of the world’s top 40,000 sites according to Alexa.com. It is popular in the UK, South Africa, Nigeria and Singapore.

ClubCall is now owned by Independent Content Services Ltd and continues to operate via clubcall.com, which has gone through a few redesigns since 1996.

Captures in this post by Alistair Buxton and Dan Farrimond. 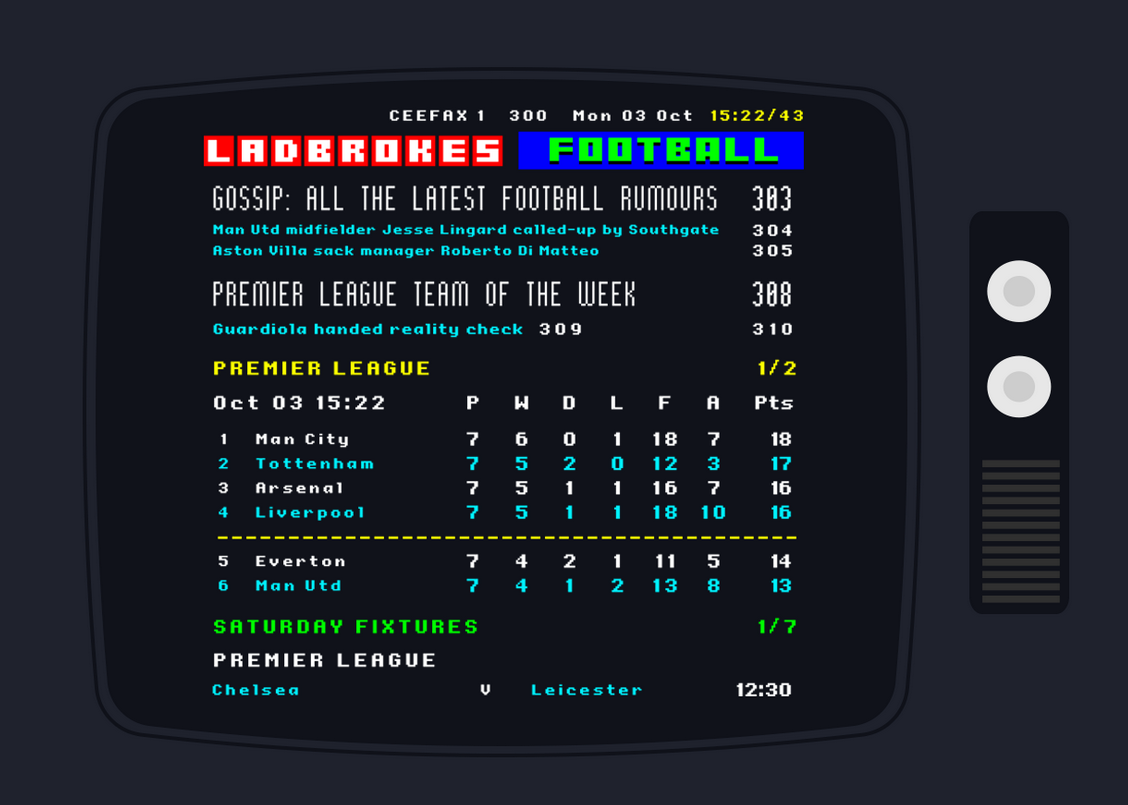 Four years since we said goodbye to Ceefax

Dan: And now, here’s something very special from the blokes at Ladbrokes. Take it away, chaps… 23rd October, 2012. That was the day that...