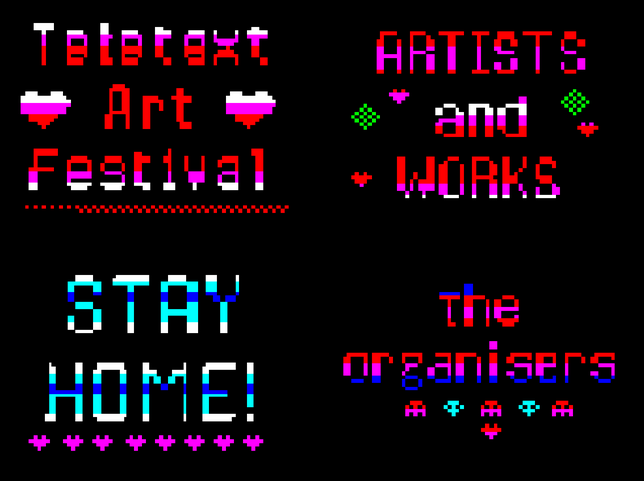 Today sees the long-awaited official launch of the 2014 International Teletext Art Festival, marked by a big bash in Berlin. If you can’t make it to one of the associated exhibitions, do not fear, for like teletext itself, this is a highly flexible festival.

But that’s not all. Not only are the artworks available on the web at the Teletext Art Fest Online Exhibition, but you can also view them as they were meant to be seen: on your television set! Thasright folks, SwissText, ARD Text, ORF Text and ARTE Text are all broadcasting the exhibition liiiive across Europe until 14 September.

But that’s still not all. You, the audience, can get involved by tweeting pictures of the artworks in situ –be that a television set, your computer monitor or tablet computer– to the #itaf14 Twitter hashtag. ITAF In The House is a Tumblr blog consisting of photos submitted by you, the teletext-viewing public, so get snapping!

But that’s *still* not all. The Museum of Teletext Art, shown on Finnish YLE Text page 805, has also been launched with its first artwork – Dragan Espenchied’s ‘Lucky Cat’. Which just so happens to be the picture below.

And that’s all… for now. Join me back here in the next four weeks for more Teletext Art Fest fun and frolics, 3-bit RGB style!

Digital artist Jarkko Räsänen is a member of the FixC artists co-operative, who have been organising teletext festivals since 2012. Their most recent teletext...

Teletextart: Hi Kathrin. Thank you so much for agreeing to answer a few questions for us! I believe your piece ‘Lindsay Lohan’s Mug Shot...

I know I’m a bit late to this, but we must all rejoice, for ITAF14 has been announced by the powers that be,...